Over the time that the Friends have been in existence we have managed to help with many projects in the church.  The first was to help with work required on the South Porch and Boiler House and the next to restore the Hatchments which hang in the Cheney Chapel.

After this came the very much larger project of the restoration needed on the tower.  This had become necessary as the tower had deteriorated.  Victorian restoration had meant that the fabric was in a poor state and the Totternhoe stone had weathered badly.  The total cost was going to be around £400,000.  The Heritage Lottery fund agreed to pay 75% but the rest had to be found by church.  A Critical Conservation Appeal was set up with Lady Bowman-Shaw as the Chairman.  Through targetted fund-raising we managed to be able to provide grants totalling £65,000 towards the costs.  A book with the names of those who donated was produced to commemorate this wonderful achievement. 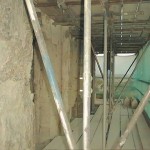 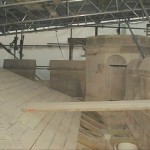 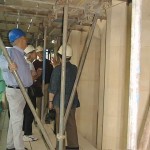 Scaffolding around the tower 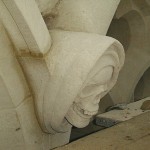 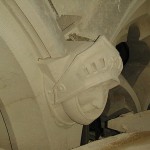 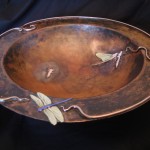 While the tower was being repaired it became obvious that the parapets had become unsafe and these had to be taken down to be repaired.  This was another large project and, once again, fund-raising went into over-drive and we were able to give £36,500 to help with this.
Whilst the belfry window frames were being restored, four new corbels were added – one on each side of the tower – Death on the north face, the Green Man on the south face, St George on the east face and the Devil on the west face.
Since then the projects supported have been smaller in nature but they are still an important benefit to the church and the village.  Money has been given to help with maintenance of the organ, provision of disabled access, repair of a window in the South Aisle and the purchase of a new font liner (dedicated to the memory of Bob Essery, at the request of his family, using a bequest from him in his will).  The font liner was hand crafted by Siân Elizabeth Evans.

In 2012 we were able to give a grant of just under £8,000 to Toddington PCC towards the replacement of the pew plinths.  These were badly in need of repair and the church looks much smarter with its new flooring.

Since December 2017 we have funded a lot of work needed on the South Wall and windows, paid for the replacement of the boilers (which both gave up just as we were approaching winter 2018), helped to fund an alarm to protect the lead on the church roof (which otherwise was going to be uninsurable) and have contributed towards the upgrade of the organ – a total of more than £70,000.